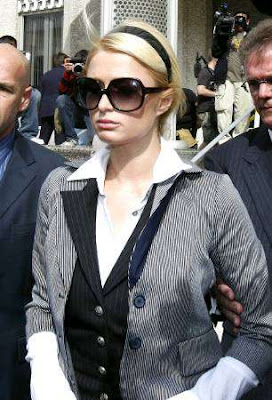 Generally speaking, there are certain life cycles that most all of us experience. When we are in junior high and high school we need the approval and companionship of our peers. When we are in college or post-high school we focus on developing self-identity and starting on some sort of career path. In our 20's we start down that path and some time in our 20's or 30's we usually switch courses at least once.

Another natural life experience is to find God. Such is the case for Paris Hilton:

After spending three days in jail last week, Hilton was briefly released to electronically monitored home confinement Thursday for an undisclosed medical condition.
An outraged judge sent her back to jail Friday.
The call came over the weekend after Hilton's mother, Kathy, phoned Walters. Paris Hilton called her mother on another line, found out her mother was talking to Walters, and then called Walters collect. All inmates must call collect.
Hilton reiterated assertions that jail has changed her: "Now, I would like to make a difference. ... God has given me this new chance." Daily Breeze

PARIS Hilton believes her jail sentence was a message from God to change her party-loving lifestyle and become a positive role model for people who look up to her.
In her first interview since she was dramatically sent back to jail on the weekend, Hilton said her imprisonment had been a life-changing wake-up call.
"I used to act dumb -- it was an act," she said. Herald Sun

Paris found God. Or else her PR guy did. But whatever, let's roll with it. A tragic event triggers a deeper spiritual sense. The self-absorbed socialite has to stay in a small cage, eat bad food, and can't wear make up. That's basically my daily life, but for Paris it is a major shock to the system.

Might we correlate this with the sensus divinitatis that we have been discussing? Is this part of the way we were wired? Traumatic events trigger a deeper focus on the most meaningful things in life and most often this involves God in some way or another: Plead to God, repent before God, get angry with God, question God, vow to live a different life, etc.

Why is it that we puny mortals turn to God in crisis? Is it the last, desparate hope? If all else fails call on God? Perhaps. But this is not the case in all instances, and even in the instance of the last-ditch-effort crowd there is at least some sense that there is a God and that he has the power to do something and that he just might be merciful enough to help.

The scenarios for the Traumatic-Event-God-Seeker are very diverse. But amidst all of them there seems to be some sense that God is real, that God has the power to make a difference, and that God might (or should) do something to intercede.

The self-absorbed socialite has to stay in a small cage, eat bad food, and can't wear make up. That's basically my daily life, but for Paris it is a major shock to the system.

I thought the same thing myself. Heck, I wouldn't mind being in her place--I could use a month off from work.

No kidding! Plus I could read and work out all day with no responsibilities. Not too bad.....of course, thinking about the showers kind of makes me cringe.....maybe I'll just stick with my life as is.....