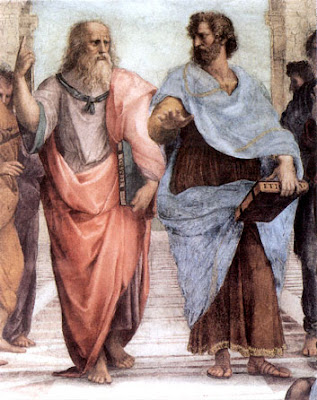 After lunch today a friend handed me a 6 page theodicy that he had put together. What is a theodicy, you ask? It is, basically, a theory that deals with God and the problem of evil in the world. It asks and attempts to answer the age old question: If God is all-good and all-powerful why is there evil in the world?

But even before I got into his arguments I couldn't quite get past the second sentence:
It is important to have internal consistency amongst our beliefs - especially those concerning our Creator.

But this is an assumption, and I'm wondering how well grounded it is. On the face of it I suppose it is true in most cases, i.e. most of my life I go around trying to be logically consistent. I certainly don't want to be illogical or irrational! But why do I do this??? Do I have a reason for reason?

And what about the Creator God? Is he bound by our own "internal consistency"? What is internal consistency? By my guess it has something to do with logic and rationality. We use logic/rationality to measure whether various statements (like "God is good" and "God is all-powerful" and "evil exists") are consistent with themselves. We use logic and rationality all the time to help us through life. We don't really need to be taught logic - most people develop some form of rationality quite naturally. On the other hand, it doesn't hurt to have people teach us logic and to sharpen our reasoning through argument or debate.

So, because of our use of logic in so many areas of life we develop systems of logic. Online you can cross reference several philosophy sites to have a look at various developments in the field of logic:
You can scan through the various articles on logic at the Stanford Encyclopedia of Philosophy: http://plato.stanford.edu/contents.html#l
Same thing at the Internet Encyclopedia of Philosophy: http://www.iep.utm.edu/l/
You can jump over to Wikipedia to get an overview: http://en.wikipedia.org/wiki/Logic

The interesting thing you will find if you are new to logic is the very diverse perspectives that philosophers have on just what logic is and what its place is. Same thing with rationality - a plurality of perspectives on what it is and what it means.

This will be a contested and debated point, but I would put forth that logic/rationality is a human construct. (I'm not a Kant scholar by any means, but I think my thoughts here would be close to what Kant calls a synthetic apriori judgment.) We need to use logic. We have to rely on rationality. We just do it - it's part of our world and how we live life, and it explains so much. But where do we get logic? And whence cometh rationality? The "Laws" of logic didn't drop from the heavens - they are debated. Exactly what constitutes a "law" and what it means for us is something that we construct. We can't really deny logic, but does that mean we can absolutely affirm it?

And that all brings us to God. Must God be "logically consistent"? Especially in a world where "logic" and "consistency" are debated and contested terms.Why must God be internally consistent to my mind? Some have denied their belief in God based on the fact that the idea of God and/or God's revelation is not "internally consistent" on their definitions. So, in essence, they have defined God out of existence!

But what if God is beyond logical constructs of our minds? What if God is not "rational" on our terms? Is this possible? Or even desirable?

Again, I'm not being anti-logical here. As I said, I love logic and I use it all the time. So, for me the question is not the value of logic, but simply the place of logical consistency when it comes to God and his actions. Has God ever made a point of telling us that he is logically consistent?? Or that he is rational? Or that he is even reasonable in all circumstances?

You say that rationality is a human construct. Fine. How about concepts like transcendence, enigma, paradox, mysticism, mystery, empathy? One could conceivably construct a god who personifies rationality, or arationality, or even both at the same time. Kind of like Taoism -- which, by the way, C.S. Lewis seems to be pretty high on in The Abolition of Man

If rationality is a human construct -- and I agree that it is -- then it's plausible to assert that other non-rational mental operations are human constructs too. A God who is both rational and arational at the same time has that kind of yin-yang feel of Taoism. Is the Tao real, or is it too a human construct? Lewis says that it's real.

First of all, to say that rationality is a human construct I don't think makes it any less real. Logic is invoked to explain the real world that we operate in. Think of mathematics. 1+1=2. Well, that's just an abstract idea that I have, and it makes sense to me and pretty much everyone else. 1+1=3 does not make sense in the same way.

But how do we teach children that 1+1=2? Usually we use objects. We might have a group of apples on our desk. We take one apple and then another and say, "Two apples." We add more to the mix and all of a sudden the kid is learning how to add. So, even though mathematics is an abstract construct of the human mind it makes sense in certain "real" contexts.

It might surprise you to hear me say this, but I think I would answer "yes" to the implied question in your comment: God is, to some degree, a mental construct. That is, there are some things about God that are simply abstract and theoretical thoughts. The trinity seems to be one of these things. In the theology of the trinity we assert 1+1+1=1. This strikes me as purely a mental construct. It is an abstract doctrine meant to provide some coherence to the biblical suggestion/implication that God is revealed as three distinctive beings and yet remains one unified being. What God is really like in this regards is anybodys guess!

Other mental constructs might be theologies such as Transendence/Immanence and the Omnis (Omniscience, Omnipotence, Onmipresence). The whole idea of the ontological argument: God as a perfect being whose existence is predicated upon his perfection, i.e. a perfect being must exist.

These all strike me as abstract ideas: Mental constructions whose purpose is to organize other abstract concepts.

But if there are some concepts about God that are mental constructions does that make God any less "real"??? I would say not. Particularly if he has interjected and continues to interject and invade our world. The abstract Word did, after all, become flesh and dwell among us. (John 1) Abstract speculation to the side if Christ was Emmanuel (God with us), then we have something that is real and something that challenges us beyond mere theory to real faith commitment.

If one or more of these gods exists in the world, then his existence is presumably independent of the mental constructs we construct to understand him. A construct like the Trinity might be useful for making sense of a particular God, but the Trinity idea doesn't have to represent the essence of the phenomenon it's describing.

Mental constructs certainly don't make a phenomenon less "real." On the contrary: raw phenomena don't become real to us until we have mental constructs for making sense of those phenomena. If, on the other hand, the god in question doesn't exist in the world, then having mental constructs about him doesn't bring him into existence.